We pulled into town Friday afternoon with snowy skies. Eager to unload the truck and find our accom we made a stop at the Baldy Bar to drop off some gear and  see who was around. Our friends are usually thirsty. After an intro with our friends at the bar we turned tail to find our house for the weekend. “Come back for open mic night!” was yelled at us on our way out the door. Of course, after a lite meal and rendevous with the crew crashing at the cabin we made our way back to the bar.

The gals n’ guys in the band on stage was kind enough to invite Erik and Andy onstage after noticing their enthusiasm in singing along to their set. With Erik on lead vocals, Andy on the bongo (while holding a tambourine in his mouth…gross) this duo accompanied by the band led the bar into a full blown “Hey Jude” sing along. With bruised hands (from the tambourine) and sore throats, we made our way home. It was still puking with no signs of letting up. “Oh great… another low vis contest” was muttered amongst our pals. At least there will be snow though.

Bushy tailed and blurry eyed, the morning came around quick. The snow had already filled up past the ground floor windows. And those in the basement, well the windows were just a wall of snow. It wasn’t until the front door was cracked that we saw the first glimpse of blue skies… holy shit, get out of bed, it’s a blue bird pow day! 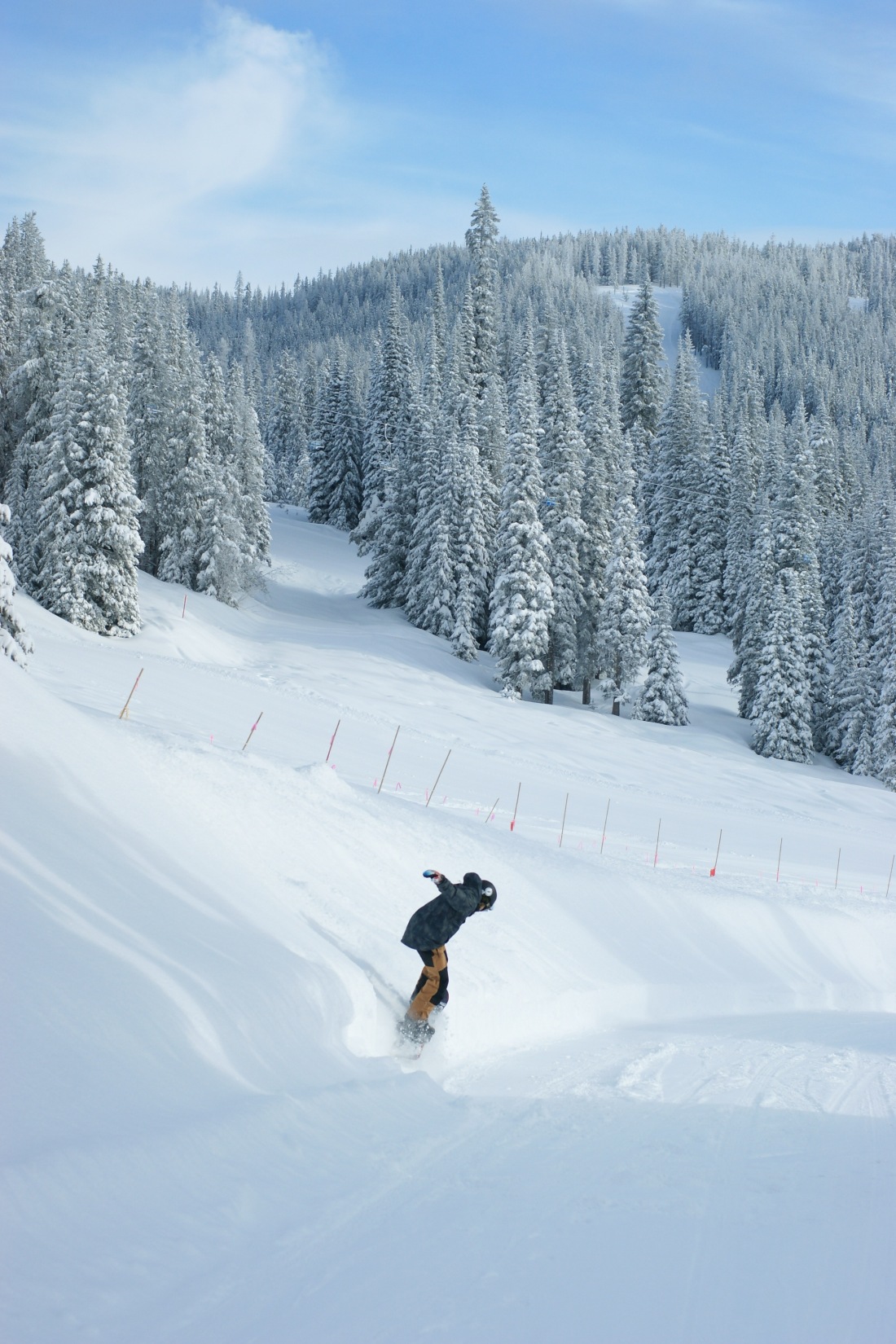 The Corduroy Cafe was the muster station for registration, which quickly filled up with contestants and over flowed into the patio out front of the lodge. Not a single person was missing a smile. We loaded up the Bombardier Snow Cat with the goods to shuttle to the top and off we went into the blue.

With the spectator grounds set up with tents, a fire, Tucker Toms Snocat and littered with viewers the first shuttle went up to get judges in the trees to keep riders on course. Tree J, otherwise known as BJ was our vertically inclined friend who stood up top a tree for the two day contest. We let him come down to drink and eat of course, but it was encouraged he stay in his tree.

After a glimpse of the course (and a sneaky side poach) the first rider dropped in. “Go right!” Tree J yelled from his perch. “Fuck yeah! Pin it!” followed shortly after. Which could only mean the first rider was lining up for the cliff drop at the end of the course. With “oooh’s”and “ahhh’s” echoing from the valley below run-one was a success. The riders up top slapped some high fives, dropped some phones in the snow and queued up to take their turn.

Before we knew it everyone was down the course. In record time for that matter. There were some hammers dropped throughout the day. And new nicknames awarded. Todd, now known as Todd-a-hawk claimed this title by flinging himself in a full on tomahawk over the showtime cliff drop. He didn’t stomp his landing, but landed himself a solid standing as the loosest of cannons over the weekend. Frick yeah Toddy!

Tree J in a tree. 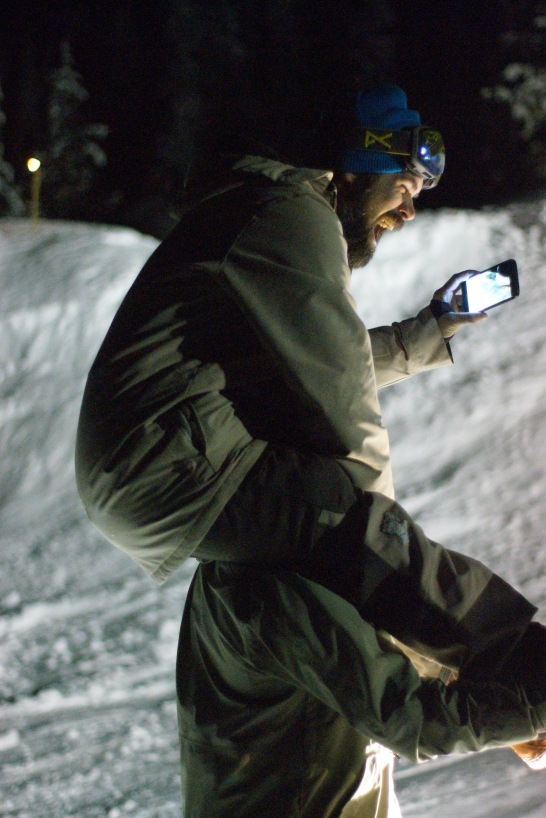 Phase two of the Slackcountry Cup is a Hip Jam which takes places back outside our 2nd (arguably 1st) favourite place on the mountain, the Baldy Bar. With some time to fill while the hip was being lit up with tiki torches and candles, participants and spectators hung around the fire and enjoyed each others company. There was even a dog there which was cool.

Somewhere in between dusk and full on nighttime the contestants were shuttled up the groomer just out of eye sight to turn around and fire their way back down towards the well lit hip. There was some significant prizing on the line from all our sponsors which helped fuel-the-send. “Dropping” Shawn Colley yelled as he pointed the nose on his snowboard towards the light. The night went on, as they do and we found ourselves back at the bar, surprise surprise. It was little more packed this time. 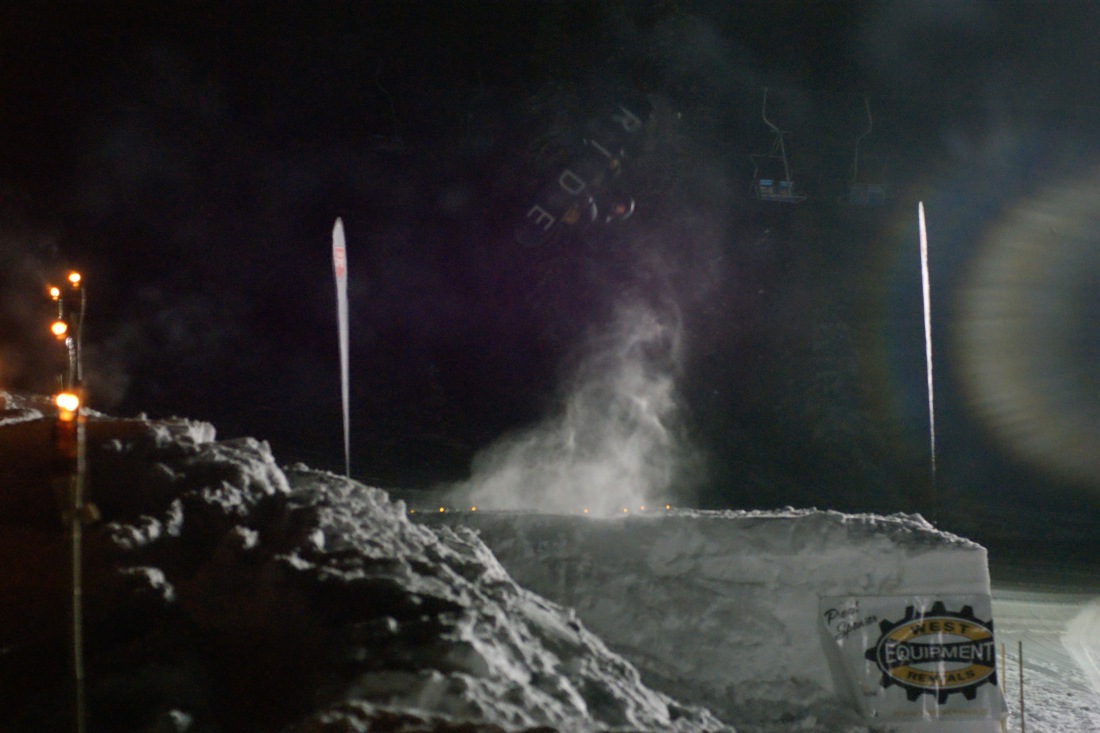 Another bushy tailed start to the day and we made our way out the door. To… a darker day than that of yesterday. Moral was high and there were even more high 5’s at the base of the mountain. I guess that’s what happens when you party with people and end up staying in the same small mountain town as them for a weekend. You get to know one another a little better.

With clouds rolling on and off the mountain face, spectators and riders had a trickier time eyeing up the course. You could barely see Tree J at some points. Finally there was a break in the clouds and we continued on a smooth schedule. We happened to have the involvement from some new friends, Bull Mountain Pow Thrashers. BMPT took the course on their strapless pow thrashers and sure enough thrashed it! 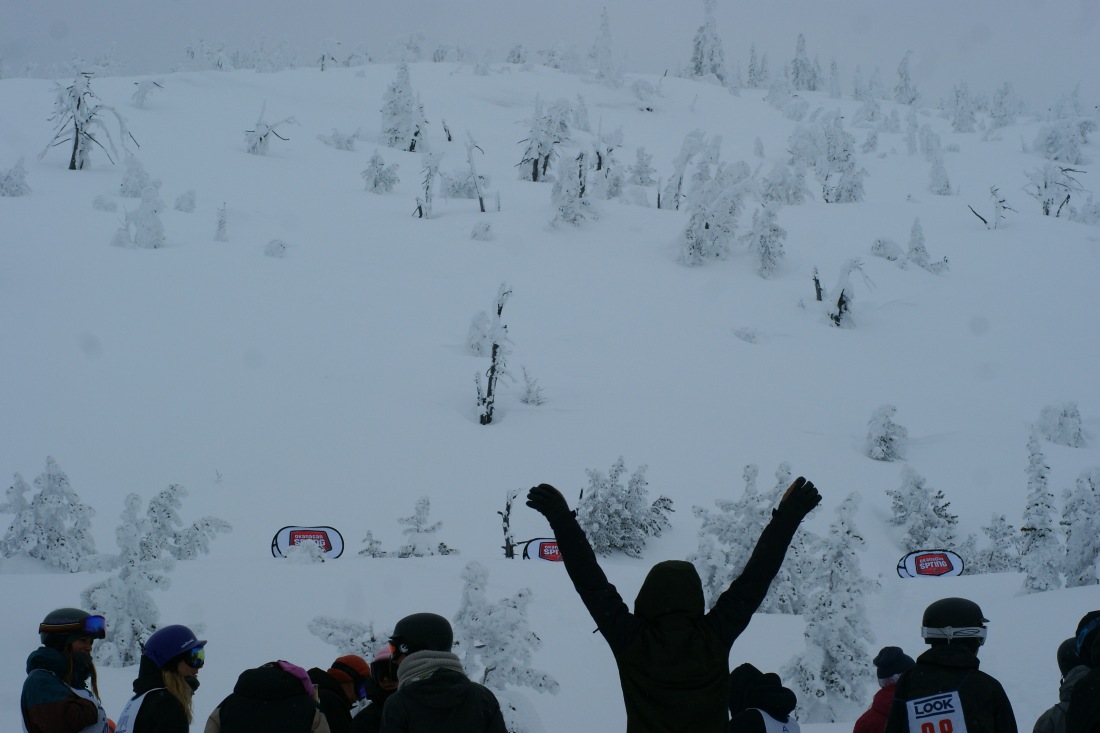 It was a success. Day two was in the books. Riders had some free time to cruise around the mountain as they wished until the award ceremonies. We had some trophies carved that now live at Mount Baldy to honour the Slackcountry Cup winners. A few hours went by and the Baldy Bar filled up for the award ceremonies. Next year, we’ll just bring our sleeping bags to the bar.

Prizes were awarded, thanks were given to the mountain operations and the many volunteers that made this contest possible. There wasn’t a single moment that Mount Baldy didn’t feel like home. It is truly a special place that happens to bring so many together for a short period of time over the winter. And for those that put up with us visiting, there is nothing but embrace and warm hospitality. Ride Fast, Stay Loose.

View all posts by Andrew